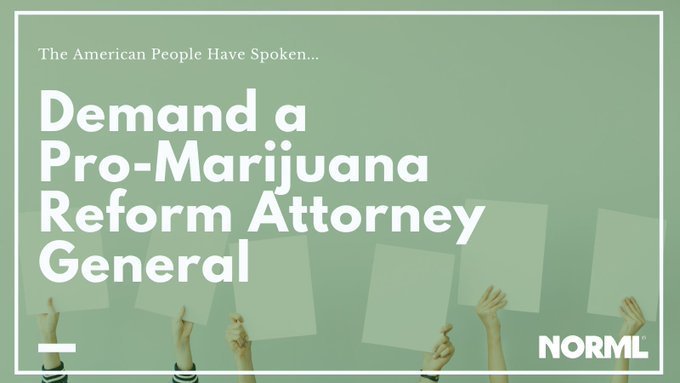 National cannabis advocacy  group NORML (National Organization for the Reform of Marijuana Laws) has addressed the incoming Biden administration, demanding the appointment of a United States Attorney General in favor of cannabis reform.

In a November 12 tweet, NORMAL urges those passionate about cannabis reform to demand change as a citizen co-signer on the organization’s letter to President-elect Biden which calls for “the appointment of an Attorney General who will acknowledge the failures of marijuana criminalization and provide leadership toward ending its prohibition.”

Join us as a citizen co-signer on our letter to President-elect Biden demanding the appointment of an Attorney General who will acknowledge the failures of marijuana criminalization and provide leadership toward ending its prohibition.

The 2020 election suggests that more and more Americans continue to vote in favor of cannabis policy reform and legalization. As a result of the November 3, 2020 election Arizona, New Jersey, Montana, and South Dakota have voted to legalize recreational cannabis use while voters in South Dakota and Mississippi have voted in support of medical cannabis, meaning that medical cannabis is now a reality in 36 of the 50 states, not to mention four of the five permanently-inhabited United States territories. This change would come in contrast to the prior administration, under which two attorney generals in opposition to cannabis legalization held charge.

Citizens wishing to co-sign NORML’s letter to President-elect Biden can add their name to the following statement on the NORML website:

Congratulations on being elected the 46th President of the United States. Tens of millions of voters cast votes in favor of your Presidency. Additionally this year, millions of voters also cast votes resoundingly approving multiple statewide ballot measures legalizing and regulating the possession, use, and commercial sale of marijuana for adults. These voters represent a broad and diverse swath of the American electorate, with voters in deep “red” states (Arizona, Montana, and South Dakota) joining with voters in New Jersey, a “blue” state, to enact legalization. Voters in Mississippi and South Dakota also approved ballot measures approving medical marijuana access.

These election results once again affirm that marijuana legalization is a uniquely popular issue that is favored by the majority of voters of all political persuasions — with majorities of Democrats, Independents, and Republicans consistently endorsing legalization in national polls. The results also continue a multi-decade long trend of marijuana’s success at the ballot box. Since 1996, voters have decided affirmatively on 35 separate ballot measures legalizing cannabis (22 legalizing medical marijuana and 13 legalizing adult use). Once these latest laws are enacted, one out of every three Americans will live in a jurisdiction where the adult use of marijuana is legal under state law.

Given this overwhelming public support, and given your campaign pledge to reform marijuana policies and to respect the legitimacy of state-specific marijuana laws, we are calling on you to appoint an Attorney General who will uphold these policies.

We urge you to keep the campaign promises made by you, as well as Vice President-elect Kamala Harris, and appoint an Attorney General who will facilitate necessary changes in marijuana policies and who will respect the decisions of those states that have already moved in this direction.

6,190 signatures have been collected as of the morning of Monday, November 16.

Zoe has integrated her background as social worker, event organizer, and scientist into the news and media lifestyle brand, Audio Kush, which she co-founded in 2018. An expat and travel enthusiast, she enjoys telling stories which explore society and delve into the mind. A major proponent of cannabis culture and the medicinal potential of marijuana, Zoe works to educate and normalize cannabis as a healing plant.

Browse and manage your reactions from your Member Profile Page