What are the best temperatures to vaporize your cannabis?

We already examined why so many cannabis consumers are switching from combusting flower to vaping dry herb. There are several advantages to vaping over traditional combustion. For starters, it’s a much more health conscious way to consume cannabinoids. Because the herb material isn’t burned when vaping, you’re not inhaling any of the dangerous pollutants often found in smoke.

Having complete command over the temperature at which you consume your cannabis or hemp flower is one of the most significant benefits of vaping. When you smoke, there is nothing keeping the temperature of the bud from getting as high as 4000 degrees Fahrenheit (2200 degrees Celsius).

There really isn’t one perfect temperature for the best cannabis vaping results. In fact, there are quite a spectrum of effects that can be achieved over a range of temps. Only through trial and error can you genuinely find the temperature that is optimal for your marijuana vaping requirements and conditions. Let’s examine the relationship between the different dry herb vaping temperatures and the boiling points of various cannabis compounds, such as cannabinoids and terpenes, and the overall high and effects.

The temperature range for vaping cannabis varies dramatically, ranging anywhere from 150 to 230 degrees Centigrade. Generally speaking, lower temps are better suited for morning and daytime use, higher temps are more appropriate for evening and late-night sessions. 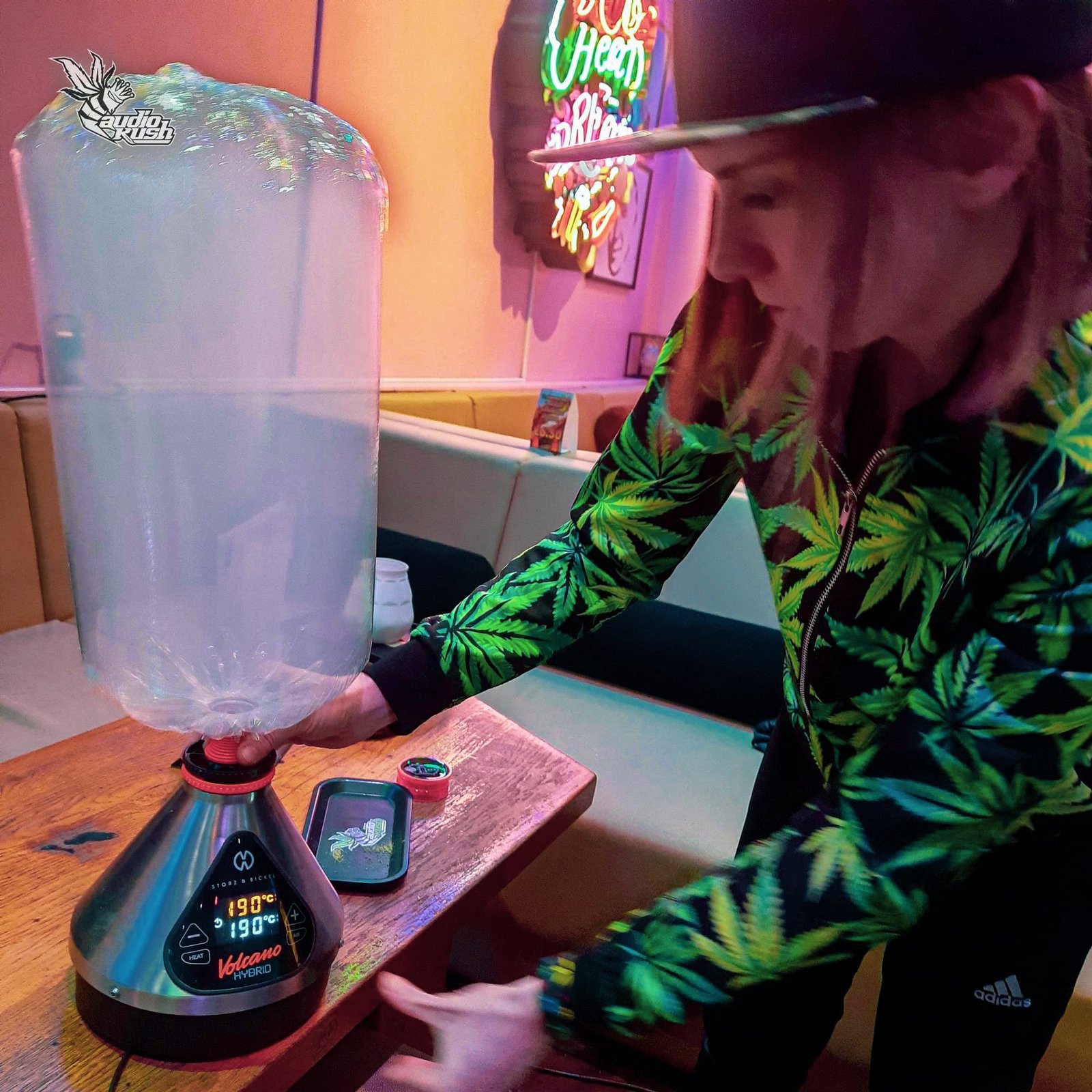 Temperatures below 190 °C. tend to produce a more cerebral high, temperature above that tend to induce a body high. Lower temps are more conducive to flavor whereas higher temps will give you the strongest psychoactive effects. Because CBD and hemp- or cannabidiol-rich strains have a greater concentration of CBD than THC, this should be taken into consideration when using cannabis for therapeutic reasons.

Note: What’s important to know is that setting your vaporizer to temperatures above 200°C (392°F) means you are approaching combustion temperatures. This is the point where the undesired substances in your plant material or vaporizer are released. Because of this, it is best to avoid high vaporizing temperatures unless necessary.

The same plant, when vaped at different temperatures, will create diverse effects due to the fact that different cannabinoids have variable boiling points. Cannabinoids evaporate at a temperature between 157 and 220 degrees Celsius (315° – 428°F).

Evaporation of cannabinoids occurs at temperatures ranging from 157 to 220 degrees Celsius (315 to 428 degrees Fahrenheit).

Here, we will discuss the two primary impacts of cannabis. One has a more cerebral influence. The other is considerably more physical, with a greater emphasis on the body. Lower temperatures, as previously said, have a bigger effect on the mind, whilst higher temperatures have a major impact on the body. Terpenes are a kind of organic hydrocarbon that may be found in many different parts of nature. Highly aromatic, they provide flowers, herbs, and fruit their distinctive scent.

Yet terpenes have other purposes as well. Since terpenes have been shown to be bioactive, they are known to have therapeutic effects. It has been shown that a great number of terpenes provide a wide range of medicinal properties.

For example, linalool is a terpene that is found in high amounts in lavender, mint, and lilac, as well as in the Shoreline and Zkittlez strains of cannabis. It has also been shown to reduce high levels of stress and anxiety. Essential oils are made up of terpenes, and these therapeutic aromas are also an important part of aromatherapy.

Terpenes have become synonymous with cannabis due to their abundance in the plant. The following descriptions outline both the effects and boiling points of dominant terpenes found in cannabis.

Note: Further investigation is needed to understand terpenes as a treatment for mental health, cancer care, and other therapeutic usage to come to any conclusions. 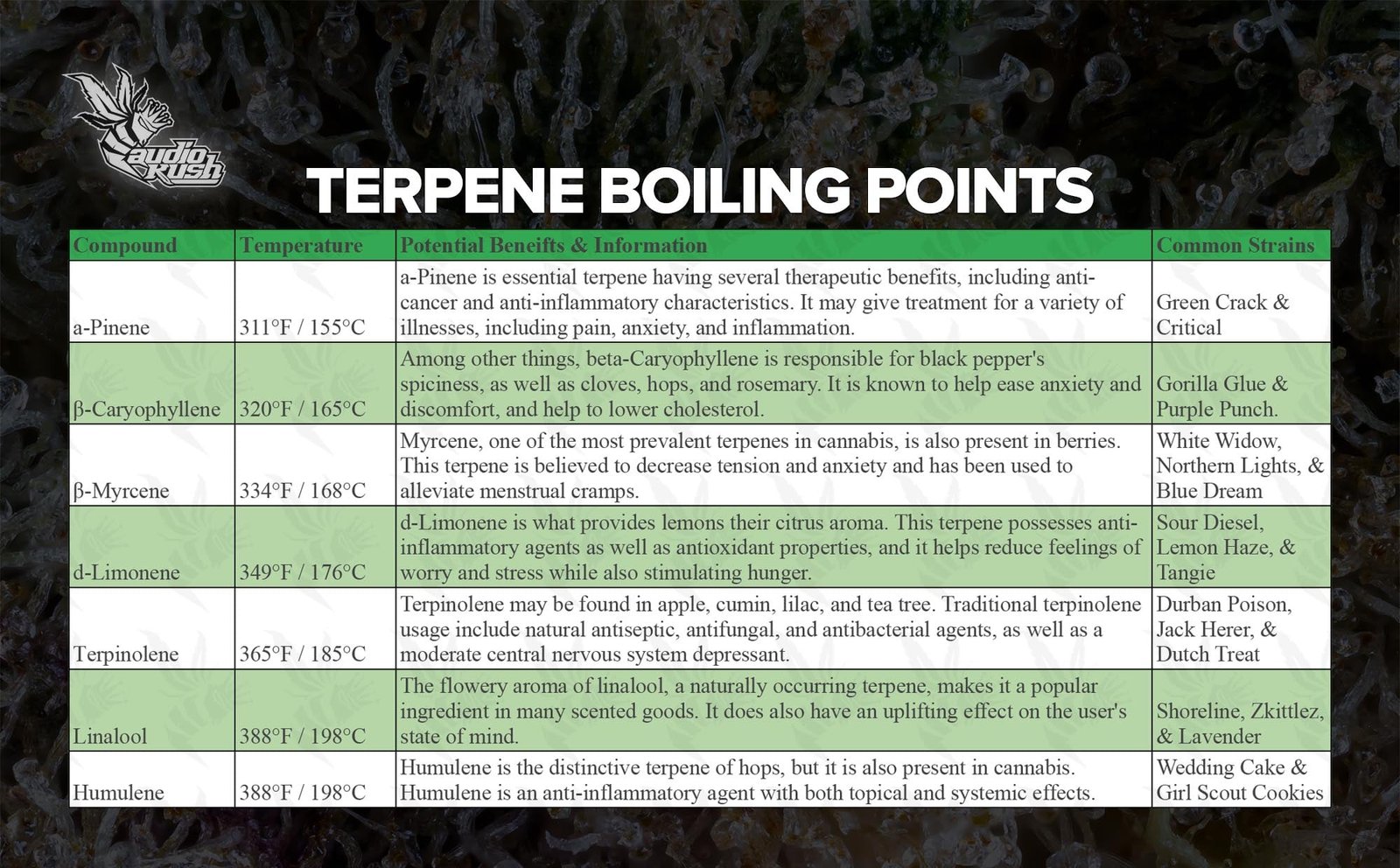 In the end, vaping temperature is entirely up to you, as everyone has different personal preferences. Every herb you get may also produce different effects at varying temperatures. Even the same strain can vary slightly from batch to batch. Since there isn’t one best temperature, it’s going to be a matter of finding your favorite temperature or range. You may want to vape at a different temperature based on the starting material, time of day, or your current mood.

Understanding both the terpenes and cannabinoids that are dominant in the variety of cannabis you are consuming is crucial. Through experience and good understanding of your cannabis flowers cannabinoid and terpene compounds you can find the most ideal vaping temperature for dry herbs.